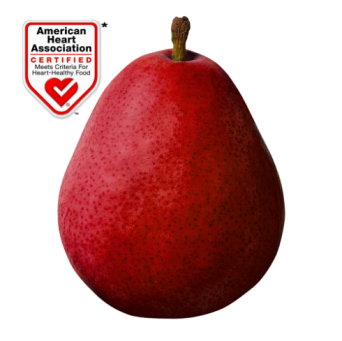 White Sangria with Pear and Cranberry

With a silhouette identical to Green Anjous, Red Anjous (pronounced ON-ju) are just as easy to identify by their shape. Although there are other red varieties of pears available, such as Red Bartlett, Red Anjous are recognizable for their egg-shaped appearance; having a large spherical lower potion that begins a gradual and even taper above the mid-point to a smaller, rounded top. The color of Red Anjous varies from pear to pear, however, they are generally dark maroon in color, sometimes with light vertical streaks of color that were naturally created by the sun while the pear was still on the tree. Just like Starkrimson and Red Bartlett, Red Anjou pears are often simply labeled as Red Pears in the grocery store.

The popularity of Red Anjous has brought a great deal of attention for this variety. Planting of Red Anjou pear trees in the Pacific Northwest has been on the increase, and they can now be found in markets from late September or early October through the summer months.

Red Anjous show only slight change in color as they ripen, which is another characteristic shared with their Green Anjou counterparts. The best indication of ripeness for any pear is the thumb test: gentle thumb pressure near the stem will yield slightly when the pear is ripe.

Red Anjous, like all pears, ripen when held at room temperature. Depending on their level of ripeness when purchased, it may take several days before they are ready to eat. The results, however, are well worth the wait. Red Anjous develop a mild, sweet flavor with very smooth texture and abundant juices when ripe.

Although they share most characteristics with Green Anjous, Red Anjous do possess one very distinctive appeal - their color. Displayed in a fruit bowl or basket on a counter or as a table centerpiece, their color sets a brilliant tone. Consider a full display of Red Anjous for Valentines Day. During the winter holidays, combine Red and Green Anjous to create a display with the appropriate colors of the season.

Because their red color is only skin deep, you'll notice no difference in cooking with Red Anjous than using Green Anjous if the recipe calls for peeling the pears. However, in a recipe calling for fresh pears (if leaving the skin on) the red color can add striking contrast and eye appeal. Consider a garden green salad tossed with slices of Red Anjou pears!

The History of Red Anjou

Red Anjous originated as naturally occurring bud sports found on Green Anjou trees. "Bud sports" are spontaneous, naturally occurring transformations that crop up on trees, and they are most often unnoticed. Red Anjous, however, are an exception. Actually, they are an exception that occurred twice, as the first red sport of Anjou was discovered in the early 1950's near Medford, Oregon, and a second red sport was discovered in the late 1970's in Parkdale, Oregon.