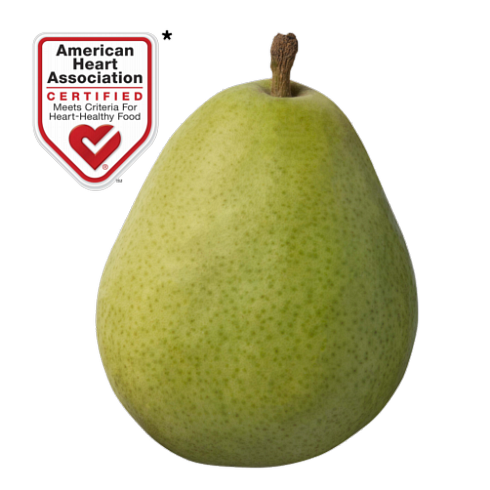 Green Anjou (pronounced ON-ju) pears are recognizable for their egg-shaped appearance, having a larger spherical lower portion that begins a gradual taper above the mid-point to a narrower rounded top. Their skin color is bright green, and sometimes has a soft red blush. Skin color shows only very subtle color change while ripening.

Harvest for Green Anjou pears begins in the fall and they arrive in produce departments in late September or early October. They are the most widely available variety through the summer. Many professional chefs choose the Anjou pear for their menus for their nearly year-round availability, as well as for their versatility in culinary uses. Green Anjou pears are PEAR-fect for just about any use, from slicing fresh into salads to baking into pies to pureeing for sauces and beverages.

The most important thing to know about Anjou pears is that they do not change color as they ripen. Unlike Bartletts, another familiar green pear variety whose skin color does change to yellow during ripening, Green Anjous will remain green even when fully ripe.

Ripen Anjou pears at room temperature. Depending on their level of ripeness when purchased, Anjou pears may take between three and five days to become fully ripe. Once ripe, you can store them in the refrigerator, where the ripening process will be slowed for a few more days.

Check the Neck for Ripeness™ daily by gently pressing your thumb near the stem end of the pear. When it gives slightly, the pear is ripe.

Why do you “Check the Neck?” Because pears ripen from the inside out, and the neck is the narrowest part of the pear, which is closest to the core. If you wait for the wider, bottom half of the pear to become soft to the touch, you’ll find the inside to be over-ripe. When that happens, though the mouth-feel may not be perfect for eating fresh, this is the perfect time for your super-ripe pear to be pureed into a tasty smoothie!

The Anjou is truly an all-purpose pear. They are juicy when ripe, and their subtle sweetness hints at a refreshing lemon-lime flavor. Their dense flesh holds up well in heated applications like baking, poaching, roasting, or grilling and they are delicious when sliced fresh in salads or eaten as an out-of-hand snack.

The History of Green Anjou

Anjou, also know as d'Anjou pears are thought to have originated in Belgium, and they are named after the Anjou region in France. The variety was introduced to England early in the 19th century. Called Beurré d' Anjou, they were introduced to America in about 1842.