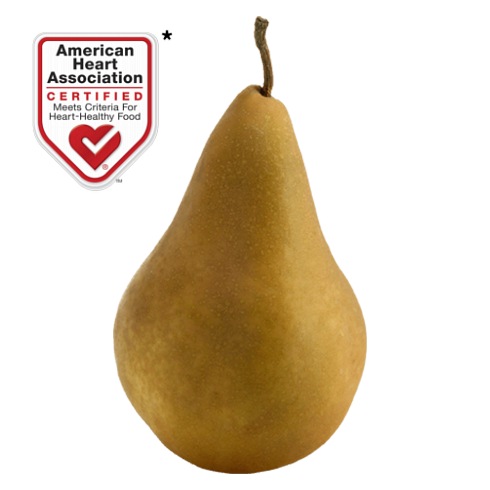 Bosc (pronounced BAHsk) pears stand out in a crowd for many reasons. Their long, curved stem and elegant elongated neck that widens gradually to a full rounded base creates a silhouette that is unique among pears. Bosc are also unique for their color: a warm cinnamon brown with russeting over the surface of the skin.
Russeting is a natural appearance for Bosc. The russeting may cover the entire surface of the pear or it may just be seen over a small portion of the skin. In either case, the quality of the fruit is not affected. In fact, many artists feature the russeted Bosc pear in their paintings, drawings, and photography because of the natural beauty it imparts.

Bosc pears are a very popular variety and when they are in season they can be found in most grocery stores. Look for them in the produce section starting in late September. During the fall and winter months, they are often part of a large display of many different varieties. Harvest for Bosc pears begins in the fall in Oregon and Washington, and they are in season from late September through April.

Bosc pears are sweeter and more flavorful earlier in the ripening process than other pear varieties. As a result, the complex flavor, honey-sweetness, and juiciness of Bosc can be enjoyed before their flesh has fully softened.

Since the flesh density of Bosc is greater than other pears, it's important to take this into consideration when determining when Bosc pears are ripe. The Check the Neck™ test, where gentle thumb pressure is applied near the stem end, is still the best method for checking Bosc for ripeness. However, keep in mind that Bosc will "give" less than other pears when they are ready. Sometimes, Bosc will also show a slight wrinkling at the base of the stem as well as a minimal color change as they ripen-- a green hue under the russeted skin will turn more yellow. However, color change is not as reliable as Checking the Neck™.
Ripen Bosc pears as you would any other variety: leave them at room temperature and only refrigerate after the pears have ripened.

Bosc pears have a more firm, dense flesh than other pear varieties, so they are ideal for use in baking, broiling or poaching. They retain their shape and texture better than other varieties, and their flavor is less likely to be overwhelmed by the use of strong spices like cinnamon, clove or nutmeg. Of course, they are also excellent for fresh eating, particularly by those who prefer a firm texture.

The History of Bosc

Bosc pears have an interesting, and as yet, not completely resolved history. It remains a matter of contention whether Bosc are of Belgium or French origin. What is known is that Bosc Pears were discovered sometime in the early 1800's. At that time, the European convention for naming pears was to use a two-name system, where the first name identified a characteristic of the fruit, and the second name referenced its origin or propagator.

Bosc, however, are known in various parts of the world by several names. Beurré Bosc identifies the fruit as "buttery" and named after M. Bosc who was the director of the Paris Botanical Garden. Calabasse Bosc is another name, and references the fruit as "gourd-shaped". Then there is the name Beurré d'Appremont, where the variety is named for a French town.
Some believe that Buerré Bosc was first raised from a seed about 1807 in Belgium by Mr. M. Bosc. Others contend that Buerré d'Appremont were discovered about 1830 as a very old seedling tree in the city of Appremont, France.

Today, Bosc are also called Kaiser Alexander in some countries.

Here in the United States, the history of Bosc Pears is more certain. The variety was first planted in 1832 or 1833, and those trees first bore fruit in 1836. The first plantings were done in the eastern U.S., on large estate orchards and later commercial orchards. Now Bosc are grown largely in the Northwest, as the trees were found to thrive best in the soil and climate of the Pacific Northwest states of Oregon and Washington.