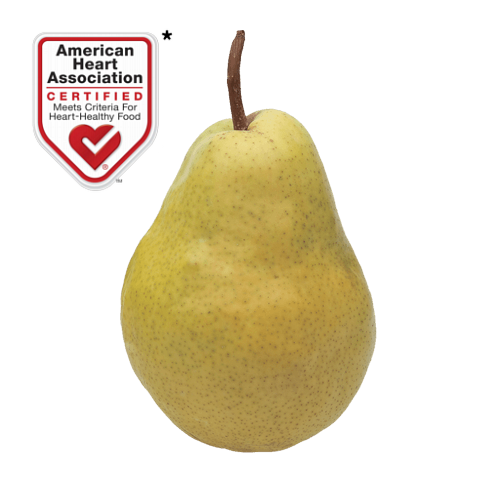 The Bartlett (pronounced BART-let) carries a true pyriform "pear shape:" a rounded bell on the bottom half of the fruit, then a definitive shoulder with a smaller neck or stem end. Bartletts are extremely aromatic pears, and have that definitive "pear flavor." Often, the Bartletts found in grocery stores are green, and then they change to yellow as they ripen at home when left at room temperature. Red Bartletts are another variety to choose, and they are usually located in produce departments right next to the Yellow Bartletts. Aside from color, there are only slight differences in flavor between the two Bartlett pears. Consider Red Bartletts as a second color alternative for displays in fruit baskets and bowls. Together in a beautiful fruit bowl, Red & Green Bartletts make a striking table-top centerpiece.

The first choice available for those waiting for the new pear season to begin, Northwest-grown Red and Yellow Bartletts are harvested in late August to early September and usually remain available through December to January or February. Careful harvesting methods and modern fruit packing facilities in the Northwest ensure high quality when these beauties arrive in grocery produce departments.
USA Pear Bartletts are harvested when fully mature, but before they become ripe. Pears are a unique fruit, in that if allowed to ripen on-tree, natural deposits of lignin and cellulose will develop in the flesh, causing a "gritty" texture. Because Northwest grown pears are allowed to ripen after harvest, you can expect a smoother texture with sweeter flavor.

The Bartlett pear is a unique pear in that its skin color brightens as it ripens, unlike other varieties of pears that show little color change as they ripen. So, how do you prefer your Bartlett pear? Do you crave it crunchy and tart? Go for it when the skin is green! How about moist and mildly sweet? Yellow-green would be for you. Do you desire a burst of super sweet juice? Then let your pear ripen until it reaches a golden yellow hue. Remember, all pears need to ripen at room temperature!

Bartletts are traditionally known as the canning pear, and you'll find several suggestions for “putting up” Bartletts in the recipes listed on this page. Because Bartletts have a definitive flavor and sweetness, they are a good all-around choice for many forms of processing. Consider them in preserves, syrups, chutneys, and more. They also make excellent dried pears.

Bartletts are much more than just a canning pear, and besides eating them fresh, you can also enjoy their wonderful flavor and smooth texture in a range of dishes. Try a sliced Bartlett atop a garden green salad with your favorite dressing. Or, simply serve freshly sliced Bartlett wedges with cheese for an appetizing snack. Always remember that any recipe calling for apples can be made using fresh pears... and Northwest Bartlett pears are an excellent choice!

The History of Bartlett

Bartlett or Williams? The Bartlett Pear we know today in North America is the same variety that is called the "Williams" in many other parts of the world. Discovered originally in 1765 by a schoolmaster in England named Mr. Stair, the Bartlett was first referred to as Stair's Pear. A nurseryman named Williams later acquired the variety, and after introducing it to the rest of England, the pear became known as the Williams Pear. Its full name, however, is Williams' Bon Chretien, which translates to "Williams' good Christian."

Around 1799, Mr. James Carter imported several Williams trees to the United States, and they were planted on the grounds of Thomas Brewer in Roxbury, Massachusetts. Later, Enoch Bartlett of Dorchester, Massachusetts acquired the Brewer estate. Not knowing the identity of the trees, Bartlett propagated and introduced the variety to the United States under his own name. It was not until 1828, when new trees arrived from Europe, that it was realized that Bartlett and Williams pears were one and the same. By then it was too late... the variety had become widely popular in the U.S. under its adopted name: the Bartlett.